Is the Rally Over or Is Recent Selling Just Healthy Profit-Taking? - The Money Map Report | High-Profit Trends with Shah Gilani

The stock market’s bounce off its March 23, 2020 lows turned into a rally, then into a bull market.

The truth is out there.

But nothing is set in stone. If the pandemic comes back, the riots continue, or the President keeps tweeting, anything could happen.

The best way to protect yourself is to take concrete steps towards financial safety and economic security.

Thousands of Americans may think they’re set in the event of a crisis, not unlike the one we’re seeing now, but that frankly isn’t true. The truth is that a second downturn could absolutely ruin your financial future.

Unless you take the necessary precautions to prepare.

It’s nothing timely or complex – in fact, protecting your wealth can be one of the easiest things you do, if you follow these simple steps .

We’ve seen over $6 trillion evaporate in 2020 alone. Don’t lose any more cash and don’t let the effects of the coronavirus, or the seesawing market, take any more money out of your pocket (or your retirement fund, or your children’s college educations…)

Click here for more details on how to prepare for the worst.

You can protect yourself if you know what you’re up against, why our markets are hurting, and how you can make money against all odds.

Here’s how the market got to where it is, what just happened, what could happen, and how to play the market no matter what happens.

That’s an economic postulate that might as well be the Federal Reserve’s mantra. Because that’s what Fed Chairman Jerome Powell pretty much said on Wednesday.

Of course, he didn’t quite say it that way. What he did say the Fed would do to combat what he called permanent damage done by the pandemic and the country’s GDP falling 6.5% in 2020, was that the Fed would provide more liquidity, more stimulus, and keep rates lower for longer.

While the promise to provide more better sooner economic and market backstopping was a positive, for sure, investors sold hard on Thursday anyway.

At least retail investors did.

The hardest hit names across the market, though almost all stocks were hit hard, were the retail darling stocks bought by bottom-fishing, mostly millennial investors who’ve been driving stocks higher since the market bottom in March.

While all the big discount brokerages reported record new account openings in the past three months, Robinhood, the first millennial-focused, commission-free brokerage to offer fractional shares to its customers, has been in the spotlight, and not just for the hundreds of thousands of accounts its opening, moreover for the statistics its Robintrack app spits out about what customers are buying at Robinhood.

Smart investors and traders have been paying attention to what millennials are buying because they know there are millions of accounts creating momentum in mostly beaten-down stocks that look like the last bargains left in a market that’s soared more than 40% in less than three months.

Yesterday’s selling looked like profit-taking, mostly led by those buyers of beaten-down stocks who rushed to take whatever profits they’d accumulated or were suddenly facing losses.

The most widely held stocks at Robinhood, according to Robintrack, were all hit hard yesterday. 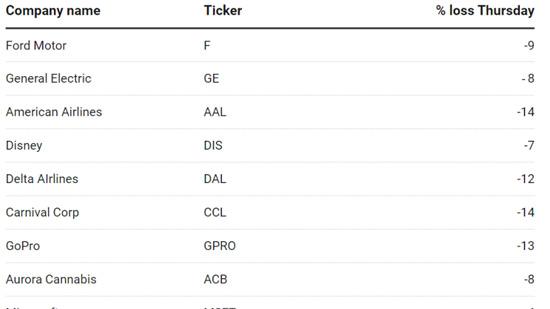 While some of the selling was prompted by Chairman Powell’s negative sentiment on Wednesday, investors and financial news outlets sighted coronavirus spikes in Texas, Alabama, Florida, and California as reasons to sell.

If we’re heading into pandemic 2.0, and cities might have to reenact lockdowns or similar measures the reasoning goes, the economy’s not going to rebound in a V-shaped recovery and the V-shaped market recovery may be overdone.

Buy the Dip, Any Dip, Mentality is Out There

That may be reason enough to not sweat any selling, no matter how ugly it looks, including days when benchmarks are down more than 5%.

In fact, those big down days may be a buy signal.

There were four times in March when the S&P fell 5% or more. If investors had bought the index on each of those closing days, by April 6th they would have been in positive territory, and at the index’s peak last week they would have had a 29% gain.

Is yesterday’s rout another buying opportunity?

What’s the market going to do?

The truth is no-one knows.

We’ve arrived at a place where markets have run up so far so fast, mostly because the pandemic looks to have slowed markedly. But it may now be doubling back on us.

If the hoped-for V-shaped economic recovery falters, and we’re only in the early innings of that game, the V-shaped market recovery will be tested further.

The good news is there’s a ton of money on the sidelines and a strong rebound from yesterday’s selling, which would manifest itself in the major benchmarks recovering all this week’s losses by the end of next week, would start to bring in that sidelined money and take stocks higher.

The bad news is retail investors are on notice that profit-taking can happen in a New York minute and they’re going to have to be more nimble buying beaten-down names.

To me, yesterday’s selloff, on huge volume by the way, which is bearish, was a warning that stocks are fully valued and subject to quick profit-taking and potential hard selling on top of that.

It’s time to check your profit targets, figure out where the safe exit doors are, and watch to see if the buy the dip crowd jumps in, or the sell the news crowd is right about the pandemic picking up speed again.

The post Is the Rally Over or Is Recent Selling Just Healthy Profit-Taking? appeared first on Total Wealth.